Religious Freaks on both sides of the Planet 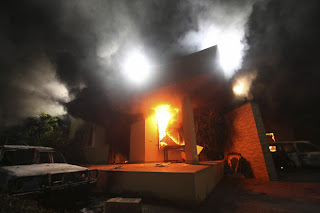 Once again we have psychopaths pretending to be Muslim murdering innocent people. That is not Islam. That murder is a far greater insult to the prophet Mohamed than any disrespectful movie is. Allah says thou shalt not kill. He didn’t say thou shalt not kill unless someone insults you or one of his prophets then murder is ok. It’s not OK. The old law of an eye for an eye, which leaves everyone blind, says if someone commits murder then the person who committed the murder should be put to death. Not some random innocent person from the same race, religion or country. Chris Stevens was a good man. 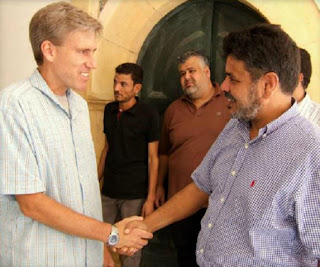 Nevertheless, in this case the guilty party never committed a murder. The guilty party made a religiously offensive movie. Yes that was bad. Yes that was disrespectful. Yes we should denounce it and speak out against it, but murder? Four innocent people? Who are you kidding? Are you kidding yourselves? If you are, you aren’t very bright. Murdering innocent people because some other idiot made a disrespectful move is an insult to Allah and the prophet Mohammad. It is the highway to hell.

In case you missed it, some prick from California made an offensive movie about the prophet Mohammad. In response there were riots in Egypt and in Libya. Only in Libya the mob stormed the American embassy and murdered the US Ambassador and three staff members who had absolutely nothing to do with making that offensive movie. This is the kind of thing we in the West think is so outrageous, it must have been the CIA to get everyone over here ready to nuke those animals. 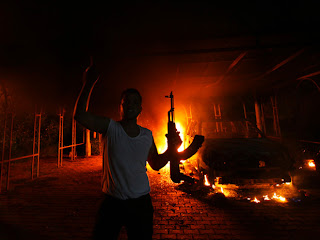 This is a repeat offense. These aren’t Muslims they are religious freaks. We see them infiltrate every religion under the sun, not just Islam. This is why we should not have spent our tax dollars supporting armed rebels in Libya when we were sent in to uphold a cease fire. Yet we know the real reason we did. We did it for the oil. Again. We need to be honest about that for a change.

So, Sam Bacile is trying to promote hate. Just like Morris Sadek and Terry Jones are. Just like Ian Paisley of old. “I’ve seen too much hate to want to hate and every time I see it I say to myself that hate is too great a burden to bear.” We need to denounce their hate as well as the murder of these innocent people. Both are wrong but murder is worse than hate. I was just at the store and saw a local woman wearing a Muslim head dress. I nod and don’t give it a seconds thought. She certainly didn’t murder anyone in Libya. Hating her for something someone else did on the other side of the world is as absurd as murdering an innocent person for what someone else did. 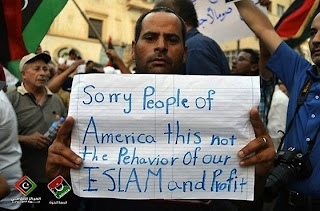 Having said that, just because a mob of idiots we helped “liberate” from a “dictator” murder some innocent people in one part of the world, does than mean we should steal from someone else in another country in another part of the world? Of course not. Let’s not use this tragedy in Libya to rationalize bombing or stealing from Iran because that would be just as wrong killing some random American for making an offensive movie.

In today’s’ Vancouver Province a headline reads: Canadians eye Iranian cash. Since Stephen Harper has kicked out Iran’s diplomat from Canada now everyone wants a piece of the pie. Now they want to steal money from Iran. The case they use as a first example is a court judgment a kidnap victim in Lebanon was awarded. I kid you not. Someone was kidnapped and mistreated in Lebanon and these criminals want to steal the court awarded damages from Iran of all places. That is as absurd as the court order awarding the families of the victims of 911 billions of dollars from Iran of all places. Why? Because they have oil and they have money and we want it. That’s why.

It all started with Operation Ajax but it certainly didn’t end there. This court order claiming Iran owes the victims of 911 billions of dollars is absolutely absurd. It is as we say, a red flag. Iran had nothing to do with 911. The terrorists came in through our friends in Saudi. There is a lot more evidence proving the CIA did 911 than Iran did.

Some people were under the misconception that Iraq was invaded because of 911. Not so. It was never implied they had anything to do with 911 when they were invaded. Bush said they knew Iraq had weapons of mass destruction and he was proven wrong. Instead of saying sorry guys we made a mistake, he said Mission Accomplished. Then when the British weapons inspector in Iraq leaked out to the media that they knew Iraq didn’t have any WMD and MI 6 were caught intentionally giving false information to the media about Iraq’s WMD, that whistle blower died of a suspicious suicide.

We initially thought Afghanistan was responsible for 911. That is why we assisted in that invasion. Only Bin Laden’s “confession” video didn’t even look like Bin Laden. Then we found out the truth about the oil pipeline and the opium production in Afghanistan. Evil powers are at work and that evil is from within. Ganging up on Iran next and stealing from them is wrong. Stephen Harper is a liar and a thief.

Obviously continued protesting violence looks like a mob of crazed dogs not adherents to any religious order. Burning American flags is just as offensive as burning a Koran or insulting Islam. They insult others and threaten violence if anyone insults them. That is not Islam. A Canadian Muslim group is encouraging Canadian Muslims to ignore the offensive video. Someone made an offensive video slandering Christ called the Last Temptation of Jesus. As sad and offensive as that movie was, we didn’t see Christians running around like wild dogs burning things and killing people. That behavior is exactly what one of the stereotypes in the offensive video portrayed.

Comments in this thread have been closed by St. Francis.