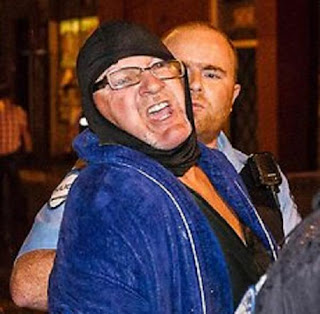 Several stories to catch up on. First is that shooing in Quebec at a political rally. I know it’s not gang related but it is related to gun violence and I do find it very disturbing. We talk about preventing gang violence but preventing fruit loop violence is a whole other dilemma. The guy was wearing a bath rope and randomly starts shooting outside a victory rally for the new Quebec Premier. Congratulations on Quebec’s first female Premier I might add. My condolences for a tragic twist to that victory.

There’s a lot to talk about and I’m just going to throw it out there and come back later to expand on the post. I have errands to run and several stories racing through my brain at once. The party Quebecois won a minority government. Not very surprising. Charest was in power for three decades. The PQ took advantage of the striking university students promising them the moon. Let’s see if they will now deliver on that promise.

The issue in this election wasn’t separatism. July of this year, one year after the Bloc was wiped out by the NDP in Quebec, a Nanos survey reported the Bloc dropped another 6.2 % since last years election. In the recent Provincial election like Stephen Harper, the PQ only received just under 32 % of the vote while Jean Charest received just over 31% of the vote. A third party, the CAQ, received 27% of the vote.

Translated into actual seats in parliament the PQ got 54 seats, Charest’s Liberals got 50 and the CAQ got 19 seats. Theoretically, there is nothing stopping the Liberals and the CAQ for forming a coalition and forming the government. Even if they don’t form the government together they certainly hold the balance of power in any decision making.

I certainly wouldn’t say there aren’t people in Quebec who still want to separate. There are people in BC who want to separate for heavens sake. I’m saying the federalist view is still alive and well In Quebec which I see as a good thing because they are strong allies in helping us defeat Stephen Harpers’ madness. I think the University tuition was a pivotal issue and time will tell how that plays out.

I do think free or reduced University tuition is a very worthy goal. I just think we have to balance it with other priorities like, medical, seniors homes, pensions and everything else like tax revenue and a balanced budget. Making changes through the democratic process is the right way to go about it. Not by preventing other kids from going to class or by throwing stones and destroying property.

The PQ’s desire for more control of immigration is a concern. It’s kind of a way to stack the deck in a possible future referendum. I think preserving the French Language and culture is important. That’s why I support bilingualism even though I suck at French. The whole idea of discriminating against people moving to Quebec based on their first language or their political beliefs is somewhat concerning.

Regardless, the whole idea of a nutbar shooting people at a political rally is very disturbing.