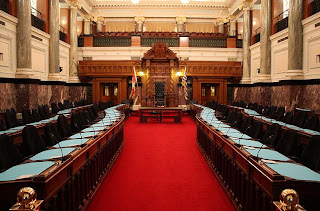 The Vancouver Province published a stellar editorial in today’s paper about the number of MPs we have in Canada. They said we need less MPs not more and they are absolutely right.

“The U.S., with about 314 million citizens, has 435 congress-men. Why does Canada, with a population one-tenth the size, need 308 MPs, let alone the 338 now being proposed? Britain, with nearly 63 million citizens, has 650 MPs, but is reducing that to 600, in part to cut the cost of government. With the cost of our Parliament pushing $600 million a year, cutting the number of MPs would free up tax dollars for more important programs.”

Here here! Can we get an Amen on that brother? Canada already has a hugely bloated parliament and Canada's 10 electoral boundaries commissions are holding public hearings to sell Canadians on a plan to increase the number of seats in Parliament to 338 from the current 308. Get off the crack! This is what’s wrong with pork barrel politics.

Part of the problem is that everyone wants more. Everyone wants more tax dollars spent in their riding. BC has an increasing population and some want that increase in population to reflect an increase in the number of MPs. Breaking news folks, as long as the number of MP’s is a percentage ration of population to MP, then it’s fair and everyone is equally represented. That means we can cut MPs and as long as we do it proportionately, we will save money and keep equal representation. We need to follow up on this.

Increasing the number of MPs should be stopped and we should follow England’s example of reducing the number of MP’s proportionately to save money. Especially in BC. They keep giving themselves raises and gold plated pensions so we need to cut the over all number of MLAs. That legislature is way over crowed as it is. It’s a very old building and they don’t have enough room to expand the floor. Cutting the MLA proportionately will save money and solve the problem of having to build another Legislature.