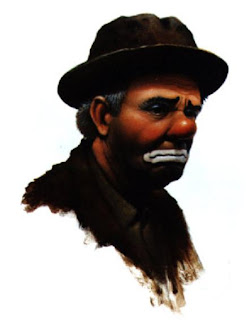 Well Skeletor was sporting his orange jump suit for his video appearance in Vancouver court today. When he sat down on the video I shuddered. That guy is really butt ugly. He has those dark sunken eyes and hollow cheeks that totally look like Skeletor’s skull. Only now he has those puffy pouting droopy lips that almost frown just like a hobo clown. Giles is finally facing a consequence for his actions for the first time in his life.

Evidently he doesn’t enjoy celebrity status in jail any more. Almost everyone is making bail except for him and Kevin Van Kalkeren. The valiant Martha Devlin is representing Crown Counsel on this case again. It appears that Giles and Van Kalkeren haven’t made an application for bail yet. It’s quite possible there is evidence already submitted that is under a publication ban that would explain why they haven’t applied for bail yet. We won’t know until after the trial is over. That’s when publication bans are supposed to expire.

However, I have a huge concern with these continued over reaching publication bans. That is not the way they do things in the US and is not the way they interpret the First Amendment which is very similar to our Charter of Rights. Not reporting evidence is bad enough. Not reporting what was done or accomplished is insane. Some keep saying how our injustice system has improved. Frankly, I’m not seeing it.

Despite my sarcasm and cynicism, I’m not the kind of guy that wishes miss fortune on anyone. This case is different. Giles has hurt a lot of people and hasn’t given a rat’s ass. Trafficking all that cocaine that ends up as crack on the street destroys lives and communities. Then there’s all the murders of rival drug dealers. It’s a dirty business and David Giles has been deeply involved in it for many years.

Before the spies start attending all the court appearances, I’ll tell you now I’m not going to be able to attend much of the trial. I have a full time job and I’m really going to enjoy the outdoors this winter.

I would however, like to ask for some assistance piecing together the dates as to when Giles was where. We know he was from Halifax and was a member of the Thirteenth Tribe which patched over to become the Halifax Hells Angels. We know some of the early members of that chapter were charged with living off the avails. I’m wondering if Giles was a member of that chapter at that time.

Someone claimed Giles never was in Quebec but something he said on a wiretap submitted in court implied otherwise. Does anyone know when and where Giles was in Quebec? We know the Halifax chapter was invited to the Lennoxville Massacre and were later accused and acquitted of being involved in that murder. Where was Giles then?

I did post some satire a while back about tension between Team Giles and Team Bryce. Some commenter adamantly denied it but it turns out there is a lot of truth to that conflict that goes back even before Juel Stanton’s disclosure. Ya gotta admit, Bryce races nitro motorcycles. That’s a lot more impressive than Giles the hobo clown. I guess the suspension of his driver’s license for the DUI will be served concurrently with his current incarceration waiting trial. He doesn’t need a driver’s license now so he doesn’t.

Anyways, today in court they just set a date to set a date for trial. The next brief appearance will be 10:00 AM November 29, 2012. I would encourage concerned citizens to check it out. You can see for yourself how the mighty Skeletor has turned into a broken hobo clown. It’s nice to see the judicial system finally work. In the end truth will prevail.