Pipeline Protests to Victoria and Beyond 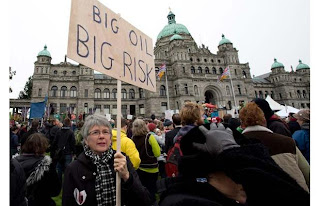 Thousands of protesters showed up at the BC Parliament buildings in Victoria on Monday objecting to the Enbridge Pipeline in BC. Today, those protests have expanded across the province.

Just to recap, as soon as the horrible track record of Enbridge pipe line leaks in the States broke and as soon as BC started complaining, Stephen Harper removed BC’s say from the equation. That is not a democracy, that is a dictatorship. It is completely unacceptable.

Harper continues to court insanity by considering letting a Communist dictatorship with the most abusive corporate history in China have our Canadian oil rights. Clearly it is a double edge sword of insanity. The problem is Enbridge’s bad maintenance’s history and their leaky pipelines in the US. The problem is giving a Communist country sole authority over our oil so if anyone protests Harper just says take it up with the Communists. It’s not my problem.

The problem is, even though we have oil in Canada, unlike other countries that have oil, we are getting shafted at the pump with outrageous prices. That’s because we let them have a monopoly on the market so they can gouge consumers at will.

Then there’s the problem of Enbridge being dishonest and rewriting the map where the tankers would go. Instead of having to navigate treacherous waters like in real life, they removed all the obstacles and claimed it was smooth sailing in their virtual fantasy. These problems need to be addressed. 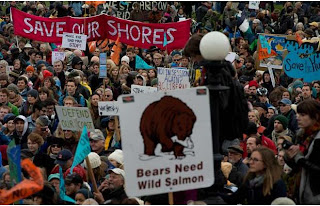