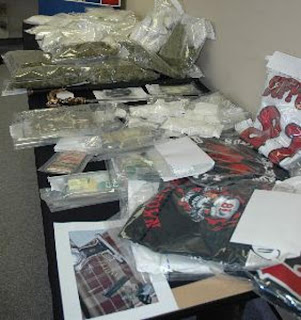 Meanwhile, back on the eastern seaboard, police say they've shut down a major drug trafficking ring in the Moncton area with ties to the Hells Angels in Ontario and Quebec. Eight people have been charged and two others, Trevor Dow and Stéphane Gallant have already plead guilty last July when 1.5 kilos of cocaine was seized.

Police claim the drugs came from Hamilton, Ont., where the accused ringleader has ties to the Hells Angels. Police displayed a package of T-shirts with a skull and the number 81 printed on them in red from Quebec city.