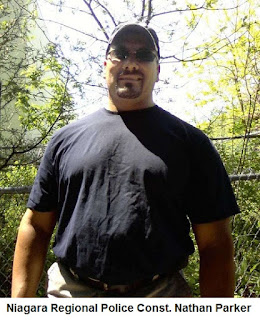 CBC is reporting that "A Niagara Regional Police officer is in stable condition in a Hamilton hospital after being shot by a fellow police officer in Pelham, Ont., the service says. Around noon Thursday, several officers were investigating a collision that had happened days before in the area of Effingham Street and Roland Road in the rural area southwest of St. Catharines, Ont., when two of the officers became involved in an altercation, according to Monica Hudon, spokesperson for Ontario's Special Investigations Unit."

The Vice is reporting that "An Ontario cop was shot multiple times by a fellow police officer after an argument between the two became violent." The Toronto Sun is reporting that "The shooting, sources say, followed a “heated argument” and “fist fight” between a constable and a detective sergeant responding to a traffic accident around Roland Rd. and Effingham St. in Pelham, 22 kilometres south of St. Catharines."

"Wounded Const. Nathan Parker was in hospital fighting for his life Thursday while Det.-Sgt. Shane Donovan was determined to be the subject officer by the province’s Special Investigations Unit (SIU). Sources told the Toronto Sun that Donovan was losing a fight before the shooting. Up to five bullets were allegedly discharged from a police officer’s gun. Police officer shot by another officer in Niagara has extensive disciplinary record."

Posted by Dennis Watson at 4:53 AM