Jenny Kwan is a Political Tramp 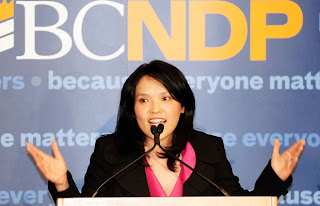 Michael Smyth from the Vancouver Province wrote a painfully true synopsis of the Jenny Kwan drama and referred to it as the Wrath of Kwan mocking an old Star Trek episode. Several other media outlets have also coined the phrase. Others have referred to it as a Monty Python sketch.

When Cope swept the Vancouver civic election under the banner of Larry Campbell, it was a united grass roots movement as it was when Reform swept the West under the banner of Preston Manning in opposition to Brian Mulrony's fiscal irresponsibly. The infighting that Jenny Kwan is publicly festering is childish and selfish. 13 MLA's is not a majority so STFU. 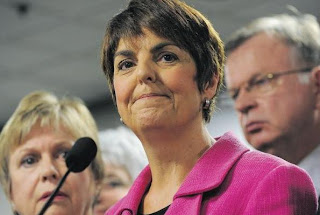 When I saw photo's of Carol James disappointment the nobility was clear. Carol James has been the advocate for the people throughout Gordon Campbell's tyranny. She has consistently preached everyone matters. When I saw the disappointment on Carol James face it was not about her. It was not about her losing her position as leader of the party. It was about her disappointment that at the crucial opportunity her dream for the people and her vision for the future was being shattered by another political opportunist who wanted to change the vision and making all about her. A survivor fashion show.

Well that's not what this is about. This is about being fiscally responsible while retaining a semblance of dignity by having the kind of self respect that displays compassion for their fellow man. That kind of dignity Jenny Kwan can not understand. 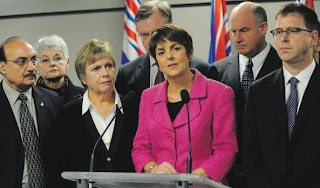 When I saw a photo of Bruce Ralston, Mike Farnsworth and Adrian Dix standing beside Carol James in her crucial hour that's all I needed to see. I have seen all three actively involved in their community in grass roots activism on public safety and crime prevention issues relating to gang violence.

The picture reminded me of the scene from A Knight's tale when the hero was in the stockade yet his real friends stood beside him against the mocking crowd. The real King saw that and could see the man's nobility while standing in chains.

If there is a question of leadership there should be a leadership convention. Call the question, count the votes and stop complaining about democracy. However, it could be too late for that. The damage is already done. If Kwan becomes leader I certainly won't vote for the party and it has nothing to do with her being Asian. It's the other MLA's pulling her strings that concern me.

I think getting a multicultural presence is important, just not that way and not that kind of presence. We don't need more dirty deeds in parliament. God knows we have enough of that already.

It's kinda like how the Federal Liberals dumped Dion and said we traded in a dud for a stud. Well Iggy is certainly no stud and Dion was no dud. English wasn't his first language. I don't give a rat's ass what language the guys speaks, I care about what he says and what he does. Dion was way better than Iggy.

The Federal Liberals could have formed a coalition government with Dion at the helm. They threw that away for Iggy because they wanted what they perceived to be a stud when he clearly is not. Like I said, it's not a survivor fashion show. This is about human beings and displaying the kind of dignity that was removed from politics a long time ago.