Kevin Falcon is a Campbell Clone 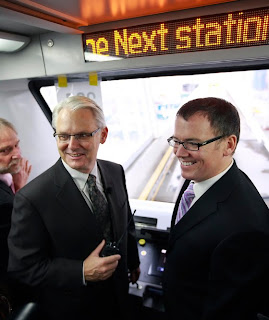 The Langley Times ran an amusing cartoon about Kevin Falcon. It was referring to Kevin Falcon giving new leadership to the flailing BC Liberals. There were three drawings of him with the caption, What if he combed his hair? And then Bleached it? It showed if he did those two things he would look like a Gordon Campbell Clone.

Dianne Watts was the only person possible that could have given the BC Liberals a new direction in leadership. Everything else is the status quo that forced Campbell to resign and be the Premier with the lowest approval rating in the history of Confederation. They are the ones that froze minimum wage for so long. They are the ones that refused to listen to the public about the HST and even spent taxpayers money on televised addresses that they know better than the public who elects them.

Kevin Falcon will simply be a Campbell Clone like all the others.