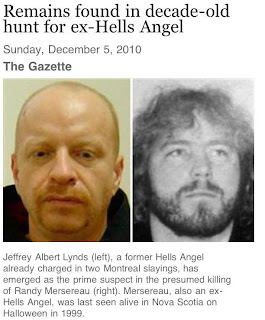 Jeffrey Albert Lynds was arrested in Nova Scotia for a double murder in Quebec. Well he has now confessed to the murder of ex Hells Angel Randy Mersereau.

CBC reports that Lynds says he lured Mersereau to the home and claims he shot Mersereau five times with a hand gun provided by the Hells Angels who ordered the hit.

My question is, if the Hells Angels ordered the hit, how can the Hells Angels not be charged as an organization for the murder? Initially I had Jeffrey Albert Lynds mixed up with Curtis Blair Lynds. Is Curtis related to Jeff?

Mersereau disappeared 11 years ago during a biker gang war. He was the target of a failed bombing at his car dealership in Bible Hill, and had not been seen since Oct. 31, 1999. RCMP confirmed human remains found last week are former Hells Angel Randy Mersereau. 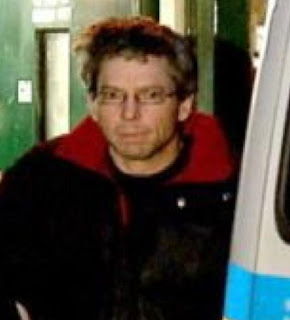 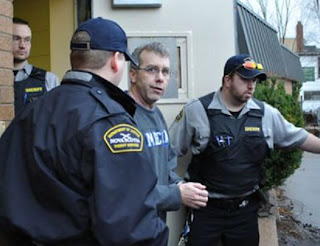 Dean David Whynott has also been charged as an accessory in the death of Randy Mersereau. Gee these are all David Giles pals from Halifax. I wonder if he knows any of them? More Hells Angels murders over the drug trade.

Here's an update on the murder.