The Rise of the Rock Machine 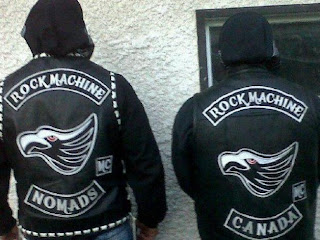 I do admit I like the Rock Machine's logo a lot better than the Hells Angels logo. An eagle's head is far more inspiring than a devil's skull with horns. The eagle head is reminiscent of the lone wolf warrior not satanic lies and depravity. I guess that's why the Mongols under the leadership of Doc adapted a simile with Sparta. The Big Red Machine clearly is reminiscent of Xerxes and Babylon.

However, I do clearly have some concerns with the Rock Machine and the Mongols. Doc assured us the Mongols didn't sell drugs. Yet he and several others were caught with drugs and weapons. The weapons don't concern me but the drugs do.

The Rock Machine was very big in Quebec for many years. They stood against the Big Red Machine's tax and survived. Not only did they refuse to pay the Hells Angels tax, they waged war with them. I do not support the argument that it is better to eliminate the smaller groups and let the Hells Angels control everything because they are less violent than the smaller groups. That fallacy is false.

The Rock Machine's web site claims they just had a non confidence vote in their national president and removed him in bad standing. That tells me two things. One, that the leadership of the organization is unstable but two, it does appear to be more democratically run than the Hells Angels which would never allow that kind of grass roots activism.

I am curious to know why they had a non confidence vote in their national president. Was it because he wanted to sell drugs or was it because he wanted to cave in and become affiliated with the Hells Angels like some Bandido chapters have done. After all, some claim that's what the Bandido massacre was all about. Trying to give up the cause of Sparta and merge with the Fat Ass Machine.

I'm told that Bilbo Baggins has joined the Rock Machine and that they are starting up in Winnipeg. No one likes to see a gang war but believe you me, competition in the market is a good thing. Just ask the crack addicts in Prince George who are being tortured by Hells Angels puppet clubs. Surely what goes around comes around. 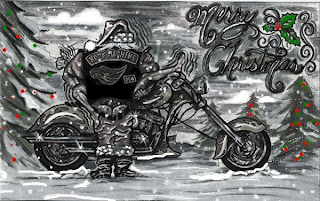