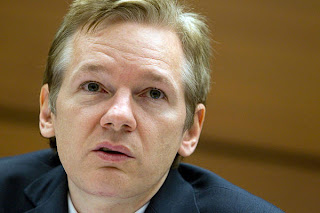 There are a few things I want to say about the Wikileaks controversy but first I want to touch on an editorial in the Vancouver Sun by Peter McKnight called The sociology of secrecy.

Mr. McKnight states: "Politicians and pundits from across the political spectrum seem to agree on two things: First, the information WikiLeaks recently released is unimportant, irrelevant and was already in the public domain. And second, WikiLeaks founder Julian Assange should be drawn and quartered for his act of high treason." That crucial observation is paramount but before diving in I want to touch on something else he said.

It's pretty obvious Mr. McKnight is highly educated. He goes into a deep philosophical reflection about how we as humans need to keep some things secret which in turn makes us who we are. He states "The act of keeping secrets about ourselves from others permits us to gain a sense of ourselves as separate from the rest of the world -that is, it allows us to form an identity."

He goes on to cite Harvard philosopher Sissela Bok, whose work is influenced by Simmel, puts it in Secrets: On the Ethics of Concealment and Revelation: "With no capacity for keeping secrets and for choosing when to reveal them, human beings would lose their sense of identity and every shred of autonomy."

When I reflect upon the solemnity of Mr. McKnight's discourse I'm forced to stop and respond with a "Narley Dude!" before I respectfully disagree. Without spending too much time explaining why I disagree I will simply state that I do not believe our identity is dependent on the secrets we keep. I believe that is an intellectual fallacy but It was a noble effort I'll have to admit.

I'm going to compare Julian Assange with Alexander Solzhenitsyn. Solzhenitsyn won a Nobel Peace prize for exposing Stalin's death camps. Indeed he revealed State Secrets. Revealing that Canada handed over Afghan prisoners to be tortured was a good thing. Whoever did reveal that. It is hypocritical for a Capitalistic society to give one person a Nobel Peace prize for exposing State Secrets within a Communist regime yet claim to do so within a Capitalist regime is treason. The logic fails miserably and is painfully obvious.

Today we also read about Chinese dissident Liu Xiaobo who received the Nobel Peace Prize in absentia. Liu asked for the prize to be dedicated to the "lost souls from the 4th of June" -- a reference to the massacre of protesters at Beijing's Tiananmen Square in 1989.

I do think Liu Xiaobo is worthy of the Nobel Peace Prize as was Alexander Solzhenitsyn. I just think it's absurdly hypocritical to claim that when Julian Assange reveals things that are unfavorable that is treason and someone should assassinate him. That kind of thinking opens a huge can of worms which we shall no doubt dive into shortly.