2016 US Election Results and California Chronic 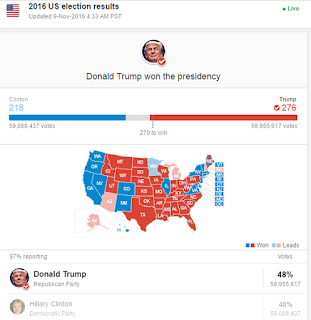 The New York Times is reporting that Donld Trump has won the 2016 election for the office of the president of the United States. He needed 270 seats to win and he won 279 while Hillary Clinton won 218. The popularity vote was almost tied. In fact Hillary Clinton received a fraction of a percent more popularity than Trump but that did not translate into more sets. Google is confirming the report and is stating that Republicans won the House as well as the Senate. 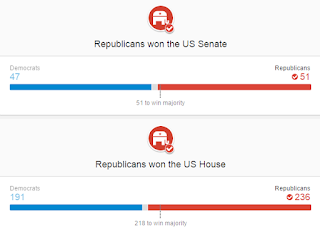 I am indeed shocked yet I will boldly declare that the sky will not fall. When Trump was leading the race for the Republican nomination I was outraged at his racial hatred and thought I'd never visit the US if he became president. Then when Hillary won the Democrat nomination I thought we were doomed to another era of the Bush Clinton Fraud. All the drug trafficking and all the arms dealing Hillary did as Secretary of State she would continue as President and the Bush Clinton Arms and Drug Dealing fraud would continue unabated.

Consequently I am shocked by the results but don't interpret them as a victory for hate. I interpret them as a victory for law and order. Who knows. Trump could easily buy into the CIA's false flag attacks and continue chasing Edward Snowden and continue destroying the US Constitution with unlawful surveillance. Time will tell. It is quite possible Trump will join in the the CIA's bank breaking investment fraud to raise money for off the book operations and continue the Pentagon's criminal quest to keep siphoning trillions of dollars out of the American taxpayers wallet.

All we know for sure is that Obama was a great guy and eloquent speaker but he was killing the Constitution like all the others in the Bush Clinton Fraud. We know that Hillary was not an enemy of Putin because she was selling him weapons grade uranium. That we do know for sure.

All I'm going to say is that the sky has not fallen. There are a lot of Americans that don't support hate and a lot that oppose corruption in government. Once again I will declare that these are the times Charles Dickens wrote about when he said they are the best of times and the worst of times depending on how we look at it. Now let's look at the issues one by one and debate the issues not the personal attacks. Let's look at the CIA's drug trafficking network that was prolific when the Clintons were in Mena Arkansas and throughout the Bush family's reign. Let's look at Hillary Clinton's involvement with Operation Fast and Furious and let's look at her arms dealing with ISIS so that criminal activity will finally come to an end. Peace.

The LA Times is reporting that "Voters on Tuesday approved Proposition 64, making California the most populous state in the nation to legalize the recreational use of marijuana. The New York Times posted a breakdown of the vote. California already voted no on this measuse. I guess if at first you don't suceed try try again. Are they going to revote the yes vote like they revoted the no vote? There were numerous other propositions on this vote that will be worth examining.

Justin Trudeau's reaction to the election results. He sure has a lot of class.