Another shooting in Surrey and more dead bodies recovered 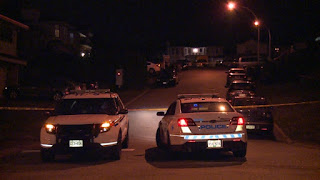 The Surrey Leader is reporting that a targeted shooting in Newton Tuesday evening has left a man in hospital with a non-life threatening injuries. Surrey RCMP were called to the 12100-block of 68 Avenue at approximately 8 p.m. where they found the victim suffering from a gunshot wound. CBC reported that a burned body found in North Vancouver on Monday was a homicide.

Last Monday the Now Newspaper reported that Police are investigating after two bodies were discovered here within 24 hours, one in a ditch and another next to a grocery store. The first body was discovered around 10:30 p.m. Friday near a Safeway store at 88th Avenue and 152nd Street, said RCMP Staff Sgt. Blair McColl. He said police and paramedics tried to revive the person when they arrived on scene but were unsuccessful. On Sunday afternoon, police identified the dead man as Greg Lupel, 27, of no fixed address. He was known to frequent the Surrey area, police stated. "Mr. Lupel’s death is suspicious, and IHIT (the Integrated Homicide Investigation Team) will continue investigating to ensure nothing is overlooked," Corporal Meghan Foster of IHIT said. "An autopsy and further testing is required to determine Mr. Lupel’s cause of death, and to determine if foul play was a factor."

Meanwhile, at just before 3 p.m. Saturday, a second body was discovered in a water-filled ditch by a mother and two children walking down the 3600-block of 176th Street. McColl said it appeared as though the body had “been there some time.” An underwater recovery team was deployed to investigate. There is no known cause of death and IHIT was not called. Investigators remained on scene Saturday evening. “We have a number of avenues to cover off — whether it’s an accident, whether it’s anything else,” McColl said. “We’ve got a lot of area to cover before we make any determinations.”