BC Law Society rebuked for violating Charter of Rights 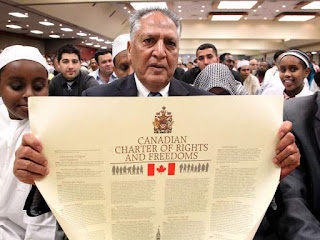 The Vancouver 24 hours is reporting that the Law society of BC was recently rebuked by the BC Court of Appeal for knowingly violating the Charter of Rights. The court upheld the B.C. Supreme Court ruling that the law society was wrong for denying certification to Lawyers from Trinity Western University because they did not approve of their religious beliefs or moral standards. In July, the Nova Scotia Court of Appeal also upheld the charter of Rights.

The key point here is we all knew what the Law Society tried to do was illegal but they did it anyways. In the United States they have Catholic Universities. You can't deny people certification from a religious University just because you don't like their religion. The Charter of Rights protects minorities from another Holocaust. If this was a Muslim or Jewish University, the decision would be the same. You can't discriminate against them. Likewise if it was a Gay or lesbian University, you can't deny them certification. In a Free Republic you can't force your beliefs on someone else but you can't punish someone from practicing their religious beliefs.

Even I knew what they were doing was illegal and I'm not a lawyer. As I previously reported, Tony Wilson, a Vancouver Lawyer who states that he is an atheist who voted in favor of accrediting TWU Law school grads pointed out that the current case law upholds the Charter of Rights. The Trinity Western University v. B.C. College of Teachers case is still the law of Canada. That 2001 case, from the Supreme Court of Canada, determined that the B.C. College of Teachers could not deny accreditation of TWU’s teaching degree. So clearly the law society knew what they were doing was illegal. The Law Society is suposed to uphold the law not defy it.

Another bizarre tragedy is that the Ontario Court killed the Charter. Vancouver 24 hours reported that Legal regulators in Alberta, Saskatchewan, Manitoba, New Brunswick, Prince Edward Island and Newfoundland and Labrador have gone along with the TWU proposal. The Supreme Court in BC and Nova Scotia upheld the Charter but Ontario did not. The Charter of Rights is a sacred document that protects civl liberty. When the courts rule against it, we are all diminished.