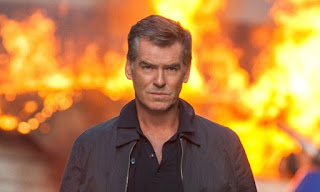 I recently watched the November Man with Pierce Brosnan on Netflix. Obviously it was fiction, but just like American Odyssey it's not only plausible, it actually happened. The story line claims that the Russian President used a false flag attack to rationalize the Chechen war and get elected. That actually did happen in real life.

In 1999, the Russian KGB allegedly conducted a wave of bombings in Russia in order to justify war against Chechnya and put Vladimir Putin into power. This was apparently a false flag attack wrongfully blamed on Chechen terrorists. September 22, 1999, locals in the regional town of Ryazan saw three men emerging from the cellars of a block of flats who later turned out to be FSB officers. When local police checked the cellars they found sacks of high explosive wired up to a detonator. The FSB later attempted to explain away the incident by claiming that the entire operation was a training exercise.

Then the November Man movie reveals it was actually the CIA that did the attack to help the Russian President get elected. That actually did happen in real life. Graham Fuller was with the CIA and was tied to Iran Contra as well as the Boston bombing. Investigative reporter Daniel Hopsicker demonstrated that the address for the Congress of Chechen International Organizations just happened to be the home address of Graham E. Fuller, formerly Vice Chairman of the Reagan-era CIA's National Intelligence Council.

The November Man is an entertaining movie. Just like Air America, it is based on a true story.

Hillary Clinton is not an enemy of Vladimir Putin. She sold him weapons grade uranium.