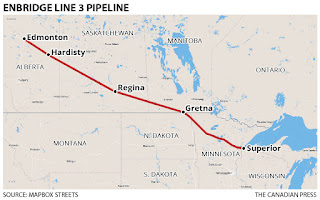 The Calgary Herald is reporting that the Liberal Government has rejected the Northern Gteway Pipeline proposal which was to send crude tar sands oil through the Bear Rain Forest. Instead they approved the Enbridge line 3 project which would send the tar sands crude oil through an expanded existing line from Hardistry, Alberta to Superior, Wisconsin.

They have also approved the twining of the existing pipeline from Alberta to Burnaby which would increase tanker traffic in the port of Vancouver. I'm not sure what the status of the proposal to pipe Natural Gas to Kitimat is. I got the impression the Liberal Government was OK with that one.

What are we doing with all the petroleum coke that is left over from all the tar sands oil we are currently refining in Vancouver? Are the tankers taking it without refining it? We know that navigating tankers all the way to Kitimat is very problematic.

Some people protest everything. People were even protesting the twining or expansion of the Port Mann bridge. That was ridiculous. People were rightfully concerned about cutting a new pipeline through the Bear Rainforest for toxic tar sands crude. They said no to the proposal. That was a huge victory. Twinning two existing lines is a fair compromise. Protesters who can't accept that are simply unable to compromise anything and don't represent the majority of Canadians.