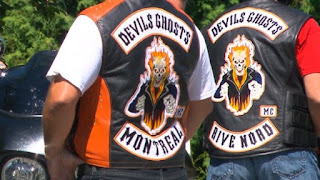 CBC is reporting that "about 70 police officers are raiding locations linked to a drug-trafficking ring on Montreal's South Shore this morning. Police say the ring is controlled by alleged members of the Devils Ghosts, which is affiliated with the Hells Angels."

In 2015 CBC reported that five members of the Devils Ghosts were charged with drug trafficking after a kilo of cocaine was seized.