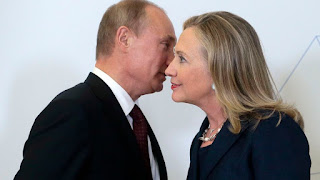 The Telegraph is reporting that "Vladimir Putin, the Russian president, said on Monday he would move nuclear-capable missiles closer to Europe in response to Nato's expansion in the Baltic states. In a bold display of force against Western allies, Russian S-400 surface-to-air missiles and a ballistic Iskander system will be deployed in Kaliningrad, which is situated between Lithuania and Poland. Iskander missiles have a range of 450 miles, which means they could hit Berlin if launched from Kaliningrad."

Hillary Clinton was the one that sold him the weapons grade uranium for his nuclear missiles.