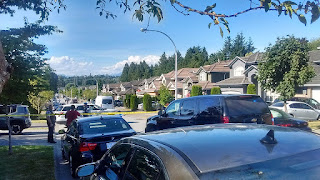 Scan BC is reporting that #Surrey #RCMP on scene a driveby shooting at 148 St & 78 Ave. Female bystander was hit by a bullet. Suspect truck was set on fire nearby.

It's actually 147 A street not 148. One resident stated they heard 6 to 7 shots and saw the vehicle speeding through the crowded residential neighborhood at 80 km/h. Tragic that a bystander was hit. That's a game changer. Firing a handgun from a speeding car in a residential neighborhood is just plain stupid. As long as we continue supporting lethal injection sites where people can smoke crack and snort cocaine this kind of senseless violence will only escalate. We are part of the problem not part of the solution. I believed in the New York model. 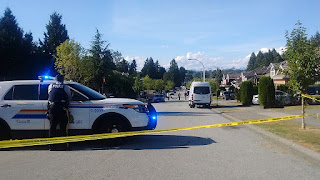 The Campbell River Mirror reported "Surrey RCMP are investigating after an innocent woman is believed to have been shot during a brazen daylight drive-by shooting on Sunday. The shooting, which occurred in the 7700 Block of 147A Street at around 3:30 p.m., is believed to have been targeted. When police arrived they found a woman suffering from a minor gunshot wound."

"According to Staff Sgt. Dale Carr, the RCMP believe that the intended victims fled the scene in a black Hyundai missing a front bumper while the suspects were seen leaving the area in a red pick-up truck. The red truck was later found on fire in the 9000 block of 150 Street. Witnesses reported that two males were seen fleeing the area."

CBC reported that there was a shooting outside a sushi restaurant in Surrey last Tuesday night at 148 th Street and 108 Avenue. The victim was taken to the hospital and is known to the police.