Christy Clark to resign as leader of BC Liberal party 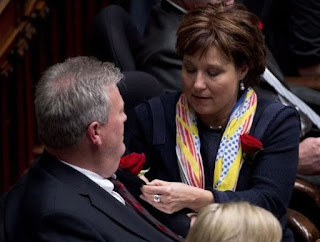 Global is reporting that Christy Clark is resigning as the leader of the BC Liberal party, effective Friday August 4. The Vancouver Sun is reporting that "Clark will also be resigning as MLA of Kelowna West. Premier John Horgan will have six months to call by-election to fill her vacant seat in the legislature." Rich Coleman will serve as interim caucus leader.

Although I've had huge concerns with the Christy Clark government it was nothing against her personally. My concerns were with the corrupt party itself. She tried to lead a grass roots movement to help the party rise above the Gordon Campbell corruption but she failed miserably. She became part of it. Getting rid of her will not solve the problem it will only make it worse.

Rich Coleman is the devil incarnate. He is as dirty as they come. In 2009 the RCMP's Integrated Illegal Gaming Enforcement Team (IIGET) relesed a comprehensive report on organized crime laundering money through BC Casinos. Right after they released the report Rich Coleman got rid of the police task force. He later became the minister responsible for gaming.

"In a 2009 report obtained by The Vancouver Sun through a Freedom of Information (FOI) request, the IIGET warned of casinos' "extreme vulnerability" to money laundering. Many investigations across Canada have found that members of organized crime use casinos for criminal purposes, the report states. A separate internal assessment, obtained by the Globe and Mail through a FOI, advised that Hells Angels members had, in some cases, succeeded in infiltrating the province’s legitimate gaming operations. The 12-member IIGET was dissolved on April 1, 2009 by then-Housing Minister Rich Coleman."

Posted by Dennis Watson at 7:01 AM