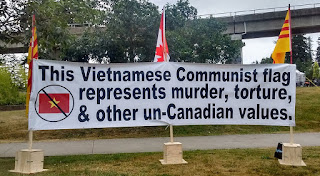 This weekend is the tenth anniversary of the Surrey Fusion Festival showcasing food and culture from all over the world. When I stopped by this afternoon there were several banners outside denouncing the Communist government of Vietnam.

One banner refers to Father Thadeus Nguyen Van Ly a Catholic Priest in Vietnam who Amnesty International adopted as a prisoner of conscience. His support for the Bloc 8406 manifesto led to his sentence on 30 March 2007, for an additional eight years in prison. The second banner also refers to Nguyen Huu Tan who was a Buddhist that died in police custody.

I met Hai Trieu a local activist that has written a book about the Communist oppression in Vietnam. The Gulf of Tonkin incident may well have been a fraud but the Communist invasion wasn't. Canada should have helped Vietnam repel the invading Communists just like it did for Korea. Our inaction in Vietnam has stained us. What's worse is our apathy now.

Mark my word, the Corporate Communism that has infiltrated Western right wing politics is leading us down the same road towards the destruction of civl liberty and human rights.

We've talked a fair bit about organ harvesting from political prisoners in China. The Falun Gong are imprisoned simply for being Buddhists then executed to order for their organs. Consequently it comes as no surprise to hear that organ trafficking is also a problem in Communist Vietnam.

When I asked Hai Trieu about it he said that organ trafficking isn't done as publically as it is in Communist China. He said in Vietnam it's done under the cloak of darkness. Young men will go missing only to be found later on in the forest with organs removed. Thankfully for some organs you dont have to execute the prisoner they can still live with one kidney. Yet Hai Trieu said frequently young children go missing where they are drugged put on ice and taken away permanently for their organs likely to be used in the open organ trafficking done in China.

Kidneys, newborns, wives for sale: Human trafficking on the rise in Vietnam

The reason so many Vietnamese Canadians are voicing their concerns to the Surrey Mayor at the Fusion festival is because of the fact that they are letting them display the Communist flag for Vietnam. Many of the Vietnamese Canadians I spoke with have survived starvation in Communist prisons for five to ten years before coming to Canada.

The Vietnamese Canadian Federation sent a letter to Linda Hepner about their concerns. I have a copy of a second letter they sent with the support of 40 other associations. Tom Zillich tweeted a copy of their press release. That's as far as the local media would go with it so I ran with it. 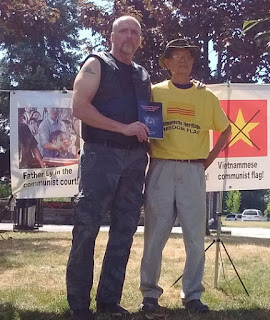 Hai Trieu gave me a copy of a book he coauthored called "The Undaunted Voices for Human Rights in Vietnam." I'm sure it will be a good read. Truth crushed to the earth will rise again simply because no lie can live forever. "What's done in the dark will be brought to the light." 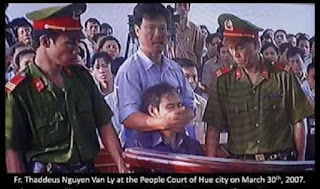 The book starts off with a quote from Victor Hugo which states that "Communism is a dream of somebody but a nightmare of everybody." Buyer Beware. One of the recurring concerns in Vietnam appears to be the obsession to send people to "Re education" camps.

The Undaunted Voices for Human Rights in Vietnam interviews several witness testifying to various forms of human rights abuses in Vietnam. The first witness is a Bhudist monk named Thich Khong Tanh who is seen in the picture lighting insence in the temple ruins. 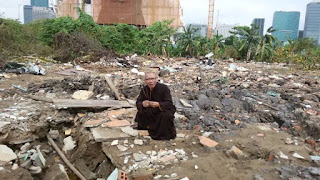 The book next interviews Father Phan Van Loi who itemized the Comunist inconsistensies. 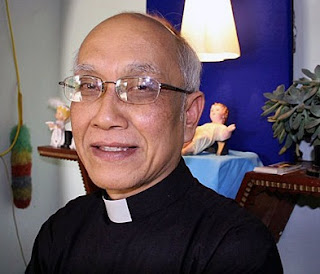 Pastor Nguyen Cong Chinh is in jail while his wife is being persecuted.