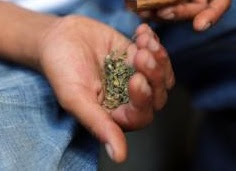 BBC is reporting that "A man in his 20s died on Tuesday night, bringing the number of fatalities this month linked to the illegal substance to eight. The drug consists of dried plants sprayed with synthetic drugs - it triggers effects similar to cannabis but is more powerful and dangerous. Synthetic cannabis has already caused huge concerns in the US and Europe. In each of the eight deaths this month, the victim was thought to have used the drug before dying or was found with the drug on them."