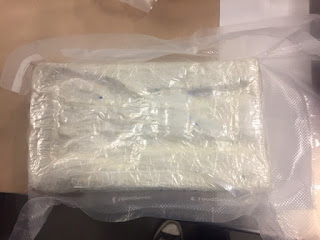 Global is reporting that a "A Kelowna man has been charged after police seized drugs, guns and ammunition. On July 11th, officers with the Combined Forces Special Enforcement Unit found two kilograms of cocaine in a vehicle. Police say a search the following day of a residence in the 400 block of McCarron Avenue turned up nine firearms including a loaded 9mm handgun and two semi-automatic rifles with prohibited over-capacity magazines. One of the rifles was outfitted with a bayonet." The bayonet just means it was probably an SKS. I have one myself. They are cheap. Over capacity magazine just means anything over five rounds. You can bend the pin in some and modify it to hold 10 rounds but that's illegal in Canada.

"George Zacharias, 46, has been charged with possession of a controlled substance for the purpose of trafficking." Interesting to note he is being charged in Abbotsford. His next appearance is 11:00 AM July 24 2017. Castanet is also reporting on the story. Sounds like the CFSU is back in action. Excellent.