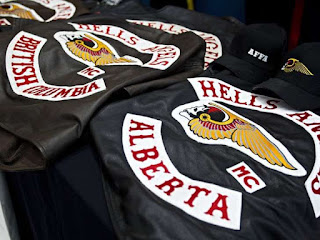 The Edmonton Journal is reporting that "A record number of gangs have been identified in Alberta, and Alberta Law Enforcement Team (ALERT) Insp. Dave Dubnyk warns organized crime has tentacles that reach across provincial borders and deep into Alberta’s communities." The article states that "A Provincial Threat Assessment identified 138 criminal networks operating in Alberta, the highest total in four years" while in reality the article only names two.

The Red Scorpions and the Independent Soldiers along with the Dirty Few and all the others except for the Warlocks are all puppet clubs that sell drugs for the Hells Angels. The only other group they mentioned was the United Nations working in Grand Prairie. That is new and represents the only separate group in the list.

In Calgary the FOB - Fresh off the Boat were drug dealers that were supplied by the Independent Soldiers who in turn worked for the Hells Angels. In contrast, the FK- FOB Killers were a group of rival drug dealers in Calgary that sold drugs for the UN.