Michael Stone eligible to apply for release from prison

The Belfast Telegraph is reporitng that "In 1988, Stone killed three people in a gun and grenade attack at Milltown Cemetery in Belfast." He can now apply for early release from prison. I thought he had already been released. Evidently "Stone was freed early from prison in 2000 under the terms of the Good Friday Agreement. He was sent back six years later after attempting to attack Sinn Fein politicians at Stormont."

Most of us over here have no recollection of the event but I do. I remember it well because I was there. I didn't attend the actual funeral. I was ordered not to and it was one of the few times I actually obeyed a direct order. I was close by and saw the army helicopter hovering over top and felt the dark evil in the air during the event.

This is the POS that went to an IRA funeral and started throwing hand grenades into the crowd of mourners. He then had a handgun to ward off attackers. I had a young friend who faced the bullets, chased him down and started giving him the boots until the helicopter came down and saved him. That was deplorable. Just say'n. He was no loyalist.

Later on in the day, a mob retaliated by getting a hold of an undercover British soldier and showed him the Irish definition of SAS - Stripped and Shot. They would stip them to their underwear, shoot them and dump them in an alley.

When I first arrived in Ireland I was in Dublin when a member of an IRA splinter group kidnapped a dentist and sent his fingers to his family with the ransom note. That was no republican. The victim wasn't a Protestant or a British soldier. He was just a local Catholic who had a career, so they decided to kidnap him for ransom. It was a criminal act of extortion. That is all.

The Irish Proclamation states "We place the cause of the Irish Republic under the protection of the Most High God, Whose blessing we invoke upon our arms, and we pray that no one who serves that cause will dishonour it by cowardice, inhumanity, or rapine." What Dessie O'Hare did was a direct violation of the Irish Proclamation. It epitomized cowardice, inhumanity and rapine. He should have been executed by his own people. Ah yes, the town I loved so well. 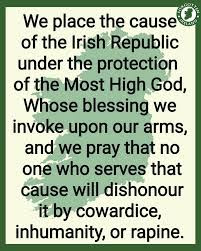