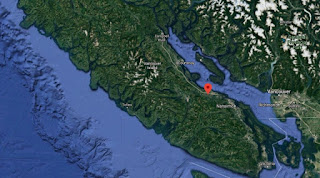 CTV is reporitng that "Mounties and the BC Coroners Service are investigating after three people were found dead and another critically injured in a targeted killing at a Vancouver Island gravel pit Sunday. The grisly discovery was made around 2 p.m. in a remote area near Whiskey Creek, approximately 50 kilometres west of Nanaimo."

"Two ground ambulances and one air ambulance were dispatched at 2:20 p.m. for "what was initially reported as a vehicle incident," according to a B.C. Emergency Health Services (BCEHS) spokesperson. The unresponsive man was pronounced dead at the scene. First responders also found a burned-out travel trailer with two dead adults inside. Another man, who appeared to have been shot, was found clinging to life in another trailer, Oceanside RCMP said in a statement Monday. Residents tell CTV News the gravel quarry is a popular place to ride dirt bikes and shoot guns."