Winnie the Pooh rewrites the Bible 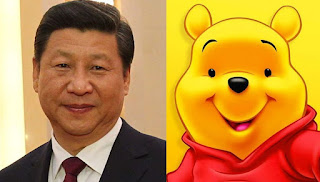 I'm going to discuss how absolutely bizarre this case is and how totally relevant it is to us here in the free world outside the bamboo curtain and how it affects everyone who uses Zoom, Facebook, YouTube, Twitter and Google. We have now entered the Twilight Zone.

Drea Humphrey from Rebel News is reporting that "Clearly, the Communist Party of China loathes religion, why else would it be so committed to persecuting religious groups such as the Muslim Uyghurs, Falun Gong practitioners, and Christians? Perhaps that’s why President Xi Jinping and his regime are on a quest to rewrite the Holy Bible that the Christians look to as a moral handbook of sorts, to align with his communistic ideology. WATCH my full report on how China is rewriting the Bible, to the point of changing the scripture in the book of John, to make Jesus a murderer who stoned a woman to death. Can you believe it? And that garbage is what the university students who are on their way to shaping the future of China are reading."

OK so the Communist Party of China completely censors the internet within China. When people in China do an Internet search of the Tiananmen Square massacre, it is nowhere to be found. They rewrote that history. Just like they rewrote the history about the mass murders of Chairman Mao. Now they're rewriting the Bible. They are changing it to defame Christ.

We're all familiar with the account of how the Pharisees brought a woman accused of adultery before Christ to be punished according to the law. They said this woman was caught in the act of adultery. What should we do with her? Christ asked what does the law say? They answered, the law states she must be stoned to death. Christ then said let he who is without sin cast the first stone. Now this answer had a double meaning. Obviously, no one is without sin. However, according to the law, the witness to the crime was the one that was supposed to cast the first stone. Obviously, the only witness to the act was the guy she was committing adultery with. He certainly isn't without sin and the fact that they are ready to condemn the woman and not the man illustrates the double standard Christ addressed.

So Winnie the Pooh and the Communist Party of China rewrites the story and claims Jesus stoned the woman which is a bold faced lie. Perhaps they were trying to claim that Jesus endorses the CCP's capital punishment of political prisoners for organ harvesting. I think not.

Many Christians were understandably outraged with the movie the Last Temptation of Christ which changed the story and portrayed Jesus to be a sinner. Yet slandering Chrit is nothing new. Why do you think they crucified him? Recognizing the prevalence of the defamation against him, he warned his apostles that If they have called the master of the house Beelzebub, how much more shall the call them of his household.

Drea Humphrey's original Facebook group was deleted because she expressed Conservative views. So what did she do? She started working for Rebel News and expanded her reader base. Lynzee Domanico from the Closet on the Right explained how YouTube demonetized Conservative channels. The same thing happened to Rebel News.

Remember how Lilly Singh made a ton of cash as a popular YouTuber? Well YouTube changed the payment formula and if you express conservative views, you make next to nothing now. My blog is blocked in China and Google has completely buried me. To find my blog now, you have to bookmark it. This is how the CCP's lies and censorship have infiltrated the free world.

Communism opposes religion because communism opposes morals. All laws are based on morals. Martin Luther King, Mother Teresa, Buddha and Mohmed were more leaders who taught people to have a social conscience and to do good. Justin Trudeau is not a moral man. He is a global gluten like Bilderberg. The politicians in the Chinese Communist party are the richest politicians in the world. There is no social justice in their communism. Only greed and lies.