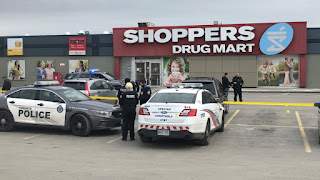 Global is reporting that "Toronto police say a 12-year-old boy who was shot in a hail of gunfire at a residential complex over the weekend has died from his injuries. Police said the boy, who was walking with his mother during the day at the time of the shooting, was an innocent bystander. Officers were called to Stong Court, north of Jane Street and Finch Avenue, at 2:22 p.m. Saturday for multiple reports of the sound of gunshots. Police at the time said two vehicles were in a parking lot when two occupants from one car got out and “ran towards the second vehicle and started firing.” City News is reporting that two suspects have been arrested in the shooting.

None of those guns were registered or legally obtained. That is the problem.