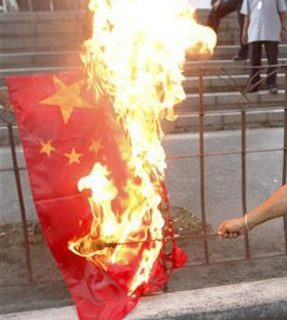 Falun Info has posted a crucial article explaining the CCP's obsessive propaganda campaign against them in China. The reason why it is so important is because the Communist Party of China has bought up our media and is doing the same thing to us. Bombarding us with lies.

The Falun Info article states that: "A hate-filled propaganda campaign of enormous proportions has been central to the persecution of Falun Gong. Under the direction of the aptly named Ministry of Propaganda, Chinese state-run television immediately launched disinformation marathons, broadcasting defamatory attacks on the meditation group 24 hours a day."

"To target the entire society, the propaganda was spread across every medium imaginable: state-run radio stations, newspapers, billboards, comic books, posters, movies, a TV series, and even theatrical plays. 'Beijing has ratcheted up the campaign to a fever pitch, bombarding citizens with an old, communist-style propaganda war,' The Wall Street Journal reported on Feb. 13, 2001."

The CCP is, the article states, the Kingdom of Fake News. Sound familiar? That's because the CCP owns and controls western media. We have seen how Post Media News has destroyed the newspaper industry in Western Canada. No one bothers reading newspapers anymore because they are tainted propaganda not news. When Post Media News took over the National Post they ran an article stating that Chairman Mao did great thing. That obscene lie has made that newspaper worthless like everything else Post Media News touches.

The problem is that Post Media News now owns Global. That mean the stench of newspaper bias has entered and consumed television media as well. The MSM refusing to report on US election fraud evidence is a prime example of how media bias has become media lies. Thousands of dead people voted in the last election by way of mail in ballot. Not one or two, thousands. In one riding, the Dominion Voting software flipped 3,000 votes from Trump and gave them to Biden. This is the biggest news story in American history and the Chinese State run media is not covering it.

Likewise, our media is bombarding us with bold faced lies about Covid. Positive test results mean absolutely nothing if they are asymptomatic. This new lockdown is a test to see how stupid we are. Fool me once shame on you. Fool me twice shame on me. Listing the lies to see the truth.