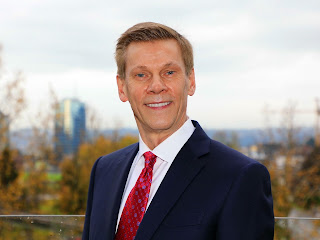 Global is reporting that "The City of Surrey, B.C., has hired the deputy chief constable from the neighbouring city of Delta to head its new municipal police force. Norm Lipinski was announced as the new police chief at a news conference Friday. Lipinski previously worked for the Edmonton Police Service and the RCMP before his role in Delta." Excellent. Full steam ahead.

However, his task to increase the public confidence in the transition from RCMP to a local police force will be an easy one because the city is not polarized. Global is lying. This tainted propaganda is a reflection of it's new ownership, Post Media News.

Post Media News supported LRT down 104th creating an infrastructure nightmare and opposed the creation of a municipal police force. The residents of Surrey chose the opposite. That is why Doug McCallum was elected. That is why I supported him. The only opposition to the formation of a municipal police force in Surrey came from RCMP members and family and the union that represents the RCMP. They ran paid ads to protect their interests not Surrey's.

Norm Lipinski's experience with both Delta and Edmonton PD which are private and the RCMP which is not, makes him a perfect pick to oversee the transition. His desire to focus on community policing confirms he is the right person for the job.

I should probably leave it at that but since I'm here, I will comment. The problem with the RCMP in Surrey specifically and the BC Gang Task force is corruption. They no longer arrest Hells Angels associates for dealing drugs only their rivals. I'm not talking about pot. Pot is legal now. There is no such thing as illegal pot. I'm talking about crack, crystal meth and fentanyl.

Selling someone cocaine and giving them fentanyl instead is bad business. Why the former RCMP in Surrey supported that is beyond me. Too many Hells Angels associates in the Witness Protection program ratting out rivals I suppose. Giving Hells Angel associates police escorts to sell cocaine was bad business. It is indeed time to move forward.

I will add that the Edmonton Police Service has a bad reputation for leaking information to the Hells Angels. Perhaps that's why he left. Norm Lipinski became assistant Polie Commissioner for E Division when Bill Elliott was Comissioner and Fraser MacRae was Surrey police chief. That's back when Surrey confronted organized crime. When Bob Paulson and Bill Fordy took over, Norm Lipinski left for the Delta Police Force. That was a wise move and we all know why. Those clowns poisoned Fraser MacRae and turned him into a company man. The only problem with being a company man is that when the company becomes corrupt, so do you.

Posted by Dennis Watson at 1:50 AM