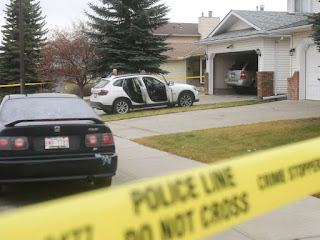 The Calgary Herald is reporting that Kyle Shae Rowe is the 26-year-old who died Monday morning, gunned down in a vehicle in the driveway of a suburban home in the city’s southeast. He was shot just before 11:00 AM on Halloween.

The Canadian Press is reporting that Police say a female student is dead and another is in hospital following a stabbing at a high school in Abbotsford, B.C. Abbotsford police Chief Bob Rich said a young man is in custody and it appears he is not a student at the school. Officers were called at 2:05 p.m. Tuesday and arrived at Abbotsford Senior Secondary School to find two female students with stab wounds. School staff had subdued the suspect while teachers and other students were administering first aid to the victims, Rich said. The two girls, whose names and ages have not been released, were taken to hospital. "I am so sorry to tell you now that one of the students has succumbed to her injuries," Rich told media on Tuesday night.

CBC is also reporting that "the Integrated Homicide Investigation Team (IHIT) has taken over the investigation into the discovery Tuesday of a man's body in Maple Ridge, B.C."

Update: CBC is reporting that Gabriel Brandon Klein is the homeless man from Alberta that walked into a school in Abbotsford and randomly stabed two teenage girls killing one of them and wounding the other. A bizarre tragedy indeed.

The Vancouver Sun is reporting that a homeless man found dead in a Maple Ridge scrap yard on Tuesday has been identified as Bradley Allan Nielsen, 53, of Maple Ridge

The Vancouver Sun is reporting that Dean Sahanovitch was arrested last week in the murder of Jonathen Patko September in Maple Ridge.