Vanier Park Kite flier passes away at the age of 90 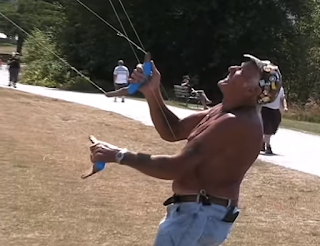 The Vancouver Sun / Province is reporting that "Ray Bethell, the self-taught kite flying maestro, who was a fixture at Vanier Park and an international star, died on Dec. 18, 2018, aged 90."

When my kids were young we loved going to Vanier park and take the passenger ferry over to Granville Island. We would get a year membership at the Vancouver Planetarium and go on a virtual voyage through space. We even took up flying two string kites thanks to Ray.

I remember seeing him there one day masterfully weaving three two sting kites at once like a conductor in a symphony. He made it look so easy so I decided to buy one in Gastown. Only it wasn't that easy. We couldn't figure out how to get the two string kite in the air. So I went back to the kite shop and they gave me the magic key.

They said hold your arms out straight parallel to the ground and move back until the kite strings are taunt. From there, take three steps back while gradually bringing your arms down to your sides. That was it. It worked. From there were were air-born.

One time I saw him there flying 21 kites at once. He had a two string kite in each hand and another connected to his hips. Then he had seven kites on each line. It turns out he wasn't just the average guy, he was a world record holder. There's lots of videos of him on youtube. Let's keep the tradition alive. It's great fun for the kid in all of us. The kite shop in Gastown has closed down but the one on Granville Island is still there.