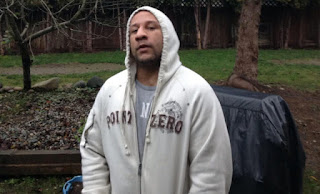 Castanet is reporting that "On Friday, Justice Gary Weatherill sentenced Stephan Rauner to an additional 10 months in jail, taking into account the many addiction recovery programs Rauner has completed during his year of pre-sentence custody at Okanagan Correctional Centre. The jail term is in addition to the year he's spent in pre-sentence custody, which he was granted enhanced credit for at 1.5 times actual time served."

"The two charges of trafficking a controlled substance, to which Rauner pleaded guilty last month, stem from two separate undercover police sting operations in downtown Kelowna, on July 8 and Dec. 14 2017. In the first instance, Rauner sold 0.2 grams of heroin, which also contained the much stronger opioid carfentanil, to an undercover officer in City Park."

"After he was arrested and released on bail, Rauner again sold an undercover officer drugs in downtown Kelowna, this time a small amount of methamphetamine. Rauner was addicted to crack cocaine when he was dealing the drugs in Kelowna, but he told the court he is just days away from being one year sober."

One year sober, that's great. Wait a minute. He's been in jail for a year. It would appear that one year in jail has helped him get off the crack. That sentence was in his best interest.

"The Crown had been seeking 36 months in jail for trafficking the carfentanil-laced heroin in addition to 18 months for trafficking the meth... Crown prosecutor Justin Dalton highlighted the particular harm that drugs like fentanyl and carfentanil have had in B.C. in recent years. In 2017, 75 people died from illicit drugs in Kelowna."

Exactly. Crystal meth is a horrible drug and selling heroin laced with fentanyl and carfentanil is fatal. We need to target these drug dealers and stop wasting our time and money over pot dispensaries. In 2008, RCMP Crime Prevention Program Coordinator Colleen Staresina said arresting drug dealers was too time consuming despite the public outcry at the time. Hopefully Doug McCallum's municipal force will follow Kelowna's example not Colleen Staresina's.