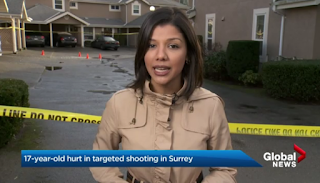 Global is reporting that "A 17-year-old is in serious condition and another person is in custody after a shooting in Surrey Wednesday night. RCMP say further investigation has ruled out road rage as the reason for a late-night shooting in a townhouse parking lot in Surrey. Police say a minor car crash between a light-coloured Jeep Wrangler and grey Toyota Sienna in a townhouse parking lot near 96th Avenue and Prince Charles Boulevard at 11:15 p.m. resulted in the driver of the Jeep pulling out a gun and firing into the Sienna."

"The 17-year-old victim was driven the hospital where he is in serious but stable condition. A 32-year-old suspect was tracked down, arrested, and is in custody. Police say it appears the shooting was targeted, but does not appear to be gang-related."