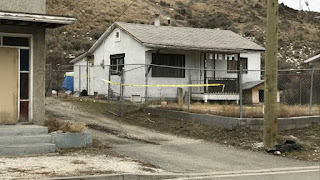 CFJC Today is reporting that "According to a news release, RCMP responded to a reported shooting at a home in the 1000-block of Collins Road Monday evening. At the scene, investigators found the body of an adult male. After an initial investigation, police believe the interaction resulting in the fatality was between two people who knew each other, and do not believe there is a danger to the general public." The Ashcroft-Cache Creek Journal is reporting that that the name of the deceased is Brock Ledoux.