Hells Angels associate from BC arrested in Thailand 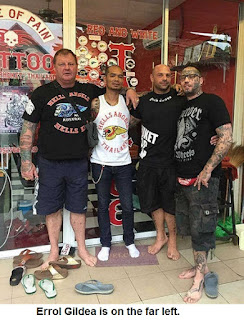 Kim Bolan is reporting that "A B.C. man who has been linked to the Independent Soldiers gang is facing drug smuggling charges in Thailand. Blair Curtis Stephens, 38, was arrested earlier this month in Bangkok, along with a Thai national. The head of the Thai Office of Narcotics Control Board said other Canadians are also involved in the smuggling operation, which was allegedly mailing heroin hidden in shock absorbers from Thailand to Australia."

"B.C.’s anti-gang agency says Stephens left Canada about six years ago when he became the focus of law enforcement in this province." Police seized 3.7 kilos of heroin in Thailand. Since he sold drugs in BC for the Independent Soldiers that means he worked for the Hells Angels.

Two previous stories about the Hells Angels in Thailand are of interest. Errol Gildea is President of HAMC Nomads Thailand. He has an interesting social preference.

The other story involves the murder of Wayne Schneider. Wayne was a full patch member of the Hells Angels originally from Australia like Errol. He was in charge of the Hells Angels drug trafficking in Thailand until he was murdered by his bodyguard so another Hells Angel named Luke Joshua Cook could take over the drug trade from him in Thailand. Luke was convicted of helping the shooter escape. As always, the president of the chapter would continue to get his cut.

Now Luke Joshua Cook is on death row while the shooter got off, so in steps BC Hells Angels associate Blair Curtis Stephens to fill the void. As always, no matter who they pick to replace him, the local President would still get his cut of the drug money. The local president also approved all murders within is jurisdiction.

None of my information came from the BC Gang Task force.