Conor D’Monte next on the rat pack's set up list 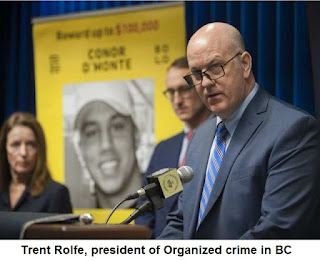 The police are offering a $100,000.00 reward for the arrest of Conor D’Monte from the UN for his alleged involvement in the murder of Kevin Leclair. AYFKM? Tax dollars?

Kim Bolan is reporting that instead of saving lives by getting fentanyl off the street and disrupting street level drug trafficking, the compromised BC Gang Task Force has created yet another dramatic red herring to waste more tax dollars on unscrupulous criminals who lie for them in court. This new campaign is empirical evidence that Gang enforcement in BC is compromised.

They are going to spend another small fortune on the same unscrupulous criminals that lied for them about Corey Vallee just so they can set someone else up for something he did not do.

The compromised BC RCMP have no desire at all to charge the person who ordered the murder of Britney Irving. That is a closed file as far as they are concerned. They have a conviction and they don't even care about accomplices. In fact they would rather pay one of the accomplices to her murder an obscene amount of tax dollars to lie about rivals again. You cannot get any more corrupt than that. Blaze is still posting on my blog. I didn't blow his cover he did.

He stopped for a while but as soon as I mentioned Billy Ly he started up again because that worthless piece of garbage can't keep his mouth shut. That makes him untrustworthy. He slowed down considerably after I outed him for posting on my blog when he's supposed to be in prison but he did not stop and yesterday he tried to post on my blog twice. I know when Blaze tries to post no mater what username he uses. If he promised his handler to stop he lied. Again.

After the Surrey Six the Bacon brothers and the UN were at war. The Surrey Six murder started the conflict. What about going after Jarrod Bacon for the murder of Nicole Marie Alemy who was shot dead in Surrey while her toddler was in the car. Jarrod was involved with ordering that murder. It's time to move forward not backward. The BC Gang Task Force has done nothing to disrupt the Hells Angels drug trafficking in BC since the Kelowna Summer Jam in 2012. Since they refuse to confront organized crime we need to hire someone else who will.