Liberal candidate drops out of Burnaby byelection, former MLA steps up to the plate 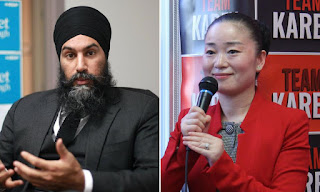 The Canadian Press is reporting that "A former Liberal byelection candidate says her political career is probably over after an online post singled out NDP Leader Jagmeet Singh's ethnicity, but she's still considering running as an Independent." OK so what was the comment?

"StarMetro Vancouver reported that Wang urged Chinese supporters to vote for her, describing herself as the only Chinese candidate while saying Singh - her opponent in the byelection - was of Indian descent." This is straight out of the Twilight Zone.

She was speaking to Chinese voters and said she was the only Chinese candidate in the byelection which is true. She said that Jagmeet Singh wasn't of Chinese descent his descent came from India. That was also true. She was pointing out an obvious fact that some people might get confused when they hear the term south Asian. She didn't say there was anything bad about Jagmeet Singh or his ethnicity. There was absolutely no need for her to resign. This is where we take political correctness over the top and completely out of context.

The Greens aren't running a candidate. Are the conservatives? Right now it's between Jagmeet Singh and long shot Laura-Lynn Tyler Thompson from Maxime Bernier's new party the PPC. 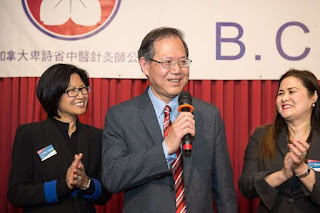 Global is reporting that "After a rocky week, the Liberals have found a new candidate for the Burnaby South byelection. Former B.C. Liberal MLA Richard Lee will face off against federal NDP Leader Jagmeet Singh in the race, joining the party days after former candidate Karen Wang left the race over a controversial social media post."

A former MLA from Burnaby has a much better chance.