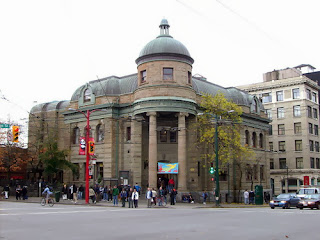 CTV is reporting that four teenagers have been arrested in connection with an armed robbery at a Surrey pharmacy Tuesday night, just one week after officials voiced concern over a number of drugstore thefts in the city. The teens were arrested in Burnaby by the VPD.

I'm glad they made the arrest. I'm just wondering why they bother arresting these kids when they let everyone else sell stolen pharmaceutical drugs outside the Carnegie centre in East Van. I mean why arrest one but not the other? It just doesn't make sense.

I thought the government said they were banning oxys because of all the theft and misuse. That doesn't seem to be happening. The over prescription of oxys is still rampant. The pharmaceutical scam continues.

Posted by Dennis Watson at 6:32 AM