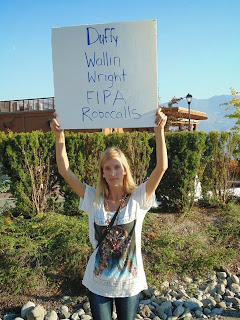 The Vancouver Sun is fueling speculation that Diannne Watts might be joining Stephen Harpers glutton all stars and enter federal politics. Oh Happy day! Get her the hell out of Surrey city Hall before she does any more irreparable damage to the city. At first I was skeptical wondering why on earth would she turn tail and run? Barinder isn't a real threat. I don't support her because she wants to bring in the mega casino all the citizens opposed.

Dianne Watts getting in the bad books with the BC Liberals might be the reason. However, I just heard that Bruce Ralston might run for Surrey Mayor. Free at last, free at last, thank God almighty we are free at last! That would certainly explain why she's running scared. Getting dumped by the BC Liberals and having to square off against Bruce Ralston. That is one election she would lose. Finally Godzilla returns to the ocean depths.

Canada needs to know how Dianne Watts screwed Surrey. Alex Tsakumis made several references to lower taxes and fiscal responsibility. I totally support that. However, that is the exact opposite of Dianne Wattts. Dianne Watts has been the most fiscally irresponsible tax and spend glutton this city has ever seen. Just think, if Bruce Ralston gets elected we could lease out Dianne Watts Ivory tower of self indulgence and all that revenue can go towards hiring more police officers. That would be fiscally responsible.

The policing budget in Surrey is in critical state. The other day I drove over to the main police station for all of Surrey and it was closed at 8:30 PM. I kid you not. That is disgusting. Spending $138 million tax dollars on a new ivory tower then claiming there's no more for police in Surrey is criminal negligence. Bruce Ralston would be much more fiscally responsible and hire more police.

Kevin Diakiw from the Surrey Leader is reporting that the conservative riding President is denying it and that Bruce Ralsotn has just said he has been approached to run but hasn't announced his candidacy. We can only hope and pray. However, Watts won't comment on why her campaign manager recently joined the federal riding executive. Maybe she's gong to actually wait to be nominated unlike her pal Fassbender who bullied his way past the nomination process.