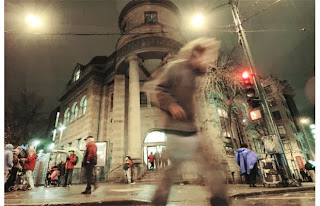 Here we go again. Banging our head against the wall. Front page of the Vancouver Province was a picture outside the infamous Carnegie center in East Vancouver talking about all the drugs for sale outside. Everyone knows the police let them sell drugs there. The whole drug war is a complete farce as long as they let them do that.

The new news is that prescription drugs are now sold there just as much as crack and crystal meth which opens up Pandora's box as to more tax dollars getting ripped off by drug dealers.

Once again it focuses on the root of the problem. Why the fuck are we letting drug dealers sell crack, crystal meth and stolen oxy's outside the Carnegie centre? It makes no sense whatsoever. Selling hard drugs is illegal. Busting someone for growing some pot but letting someone else sell crack outside the Front Room in Surrey or outside the Carnegie Centre in East Vancouver is criminally insane. The spin off violence is off the hook.

We are enabling the predatory drug dealers that beat Janice Shore to death for a drug debt in Surrey and pushed Ashley Machiskinic out of a window for a drug debt in East Vancouver. Letting these predatory drug dealers exploit the homeless is not being compassionate. It's being cruel and heartless. The same with handing out free crack pipes and mouth pieces. This is absolutely insane. I don't have to make another blog post ever again. This is the root of the problem right here. Until we address it everything else is a complete waste of time. When we let these drug dealers sell crack in public we are supporting all the trickle down crime and violence that creates which includes the torture and murder of drug addicts for drug debts. That is inhumane.