Another murderer applies for day pass 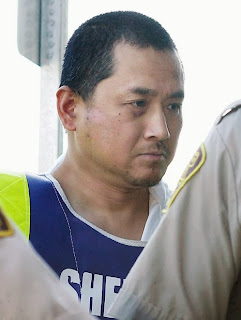 This case is yet another example of how screwed up the injustice system really is. The Vancouver Province is reporting that Vince Li, the nut bar who stabbed and beheaded someone on a greyhound bus six years ago then started eating the victims flesh while the police watched might soon be granted unescorted day trips outside his mental hospital.

Vince Li's psychiatrist says the one-time undiagnosed schizophrenic has not been violent, no longer suffers delusions and has made tremendous progress. Great. Then put him in jail to serve the rest of his sentence. Giving him unescorted day passes is criminally insane.

The courts would argue that the public need to be educated on the law. No, the courts need to apply the law the citizens create when they elected governments to make them. The courts don't know the law, they know a bunch of watered down jurisprudence that has diluted natural justice into nonexistence.