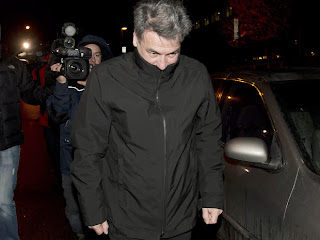 When the BC Liberals released their fraudulent budget before the election they fudged the numbers by claiming that although they were running a consistent debt, they would balance it some time in the future by extracting a dividend from BC Hydro. That claim was fraud.

We know very well the BC Liberals are the ones that turned BC Hydro into another Enron by privatizing the power brokers that sell power to the public company at inflated rates. As a result, they have been hiding the ballooning deficit that criminal fraud created for years. You can't extract a dividend from BC Hydro to balance your deficit when you are already hiding a ballooning deficit at BC Hydro. Right now we are looking at a 40% increase in Hydro rates to help offset this act of fraud where private power brokers are gouging tax payers at an unprecedented rate.

Now the BC Liberals are fudging the budget by claiming they will extract revenues from the liquefied natural gas industry. These fudge it budgets can go both ways. It's like Canada Post lying to the media claiming it forecasts a change in the consistent annual profits and anticipates an annual billion dollar loss. Those forecasts are fraudulent trying to con the public.

I'm all for liquefied natural gas. What I am opposed to is the consistent fraud the BC Liberals get away with by claiming they are balancing the budget when they committed an act of fraud by turning BC Hydro into another Enron. They keep living of the crazy stereotype that the NDP will tax and spend but they won't when in reality they are doing worse spending than the NDP ever did just like Dianne Watts in Surrey.

Talk about spin, we even have Preewee Hermon himself, Gwyn Morgan, front and centre running interference for the Glutton World Order. TransLink's spending is completely out of control. They already squander over a billion dollars a year in excessive regional gas taxes and they still want more. Why? Because they give 2.5 million free rides a year and they keep living beyond their means expanding sky train lines to nowhere instead of waiting until the current lines start paying for themselves. Why? So the corrupt companies that contribute to their campaigns can get sweetheart contracts.

Guess who got the contract for the $1.4-billion Evergreen Line? SNC-Lavalin did. Gwyn Morgan was CEO. SNC-Lavalin senior executives were charged with fraud along with Arthur Porter, the former chair of Canada’s watchdog for CSIS. Go figure. The scam never ends while tax payers continue to get gouged in the name of fiscal responsibility. Are they still selling swamp land in Florida because right now the public will buy anything.

Posted by Dennis Watson at 2:37 AM