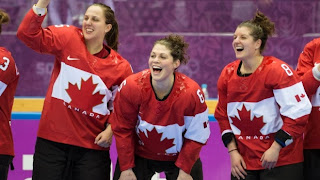 I don't normally give a rat's ass about hockey but I do have a peek during the Stanley cup if the Canucks are in it or during the Olympics. Since it's such a national event I will comment on it. I happened to see the last of the third period of the Woman's gold medal game Canada versus the United States. It was intense.

The US were ahead 2 - 0 most of the game. We were all kinda looking down saying to ourselves oh crap. Yes there's a bit of rivalry between Canada and the US when it comes to hockey but it's nothing personal. It's just that the Americans win everything. It's nice to see someone else win something for a change.

So when Canada scored late in the third period that sparked the dream and set them on fire. Their confidence was restored and they were hungry. They pulled their goalie and scored to tie it up right before the end of the third period. What a nail biter. At one point the linesman got in the way which resulted in Canada losing possession of the puck and the Americans getting a shot off to the empty net which hit the post. That would have been a tragedy if that had gone in since it was the linesman who got in the way. My daughter told me the pictures on facebook were commenting that never before has two inches made 22 woman so happy. In contrast jokes about the mens game said loser has to keep Justin Beiber.

There were three penalties in overtime. Apparently the final penalty that resulted in the Canadian's power play goal wasn't a real penalty which was shameful. No one wants to win like that. However, the Canadian team did show a lot of heart in the crucial minutes of the game. Hats off to the Americans. They played very well and it could have easily gone either way.

Likewise in the men's semi finals Canada versus the US. Both teams were very sharp in a very fast paced game that could also easily have gone either way. At least Canada didn't score on a power play over a bad call. That one was a clean victory. The thing is, even in the remote chance that Canada loses against Sweden in the finals, that really doesn't matter. We are happy they beat the Americans (no offense) and would be thrilled to see someone else win for a change. I mean look at Norway. They're leading the world this time with gold medals in these games. Good for them. I knew a guy from Norway who used to say he was born with skis on his feet. Great guy.

There were a couple of amusing beer commercials with regards to Olympic Hockey. One was from Molsen Canadian which to my understanding is owned by a American company and the other was from Budweiser. Although Budweiser is a watered down American beer it was a funny commercial. Showing the power go out around the world because everyone in Canada was watching the final gold medal game on TV and celebrating after it was over. It was very well done. I don't drink yellow beer myself. I enjoy the occasional pint of Guinness or on very special occasions a pint of dark German beer. Then again I'm the odd ball in more ways than one. Go Canada. We don't care who wins the most gold meals. We just want hockey. However, I do agree that although he NHL refs are better than the European refs a Canadian should not be reffing a game Canada is playing it.