Dennis Rodman is a traitor 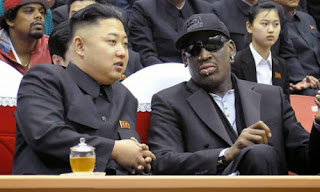 Dennis Rodman is a traitor. So is Stephen Harper. MSN News is reporting that Dennis Rodman claims he is not a traitor over his support and involvement with North Korea. Yes he is. That's exactly what he is. Let's be clear that Rodman is not on a mission promoting world peace. He's doing the exact opposite. He's running interference for a Communist Dictator that has threatened to nuke the United States.

The only thing holding back that lunatic from carrying out his threat is the fact that he doesn't have the technology to do it. Something Stephen Harper is trying to rectify by selling China nuclear reactors and giving China our oil rights. Every time we get gouged at the gas pumps we are supporting China's military expansion which goes directly to help North Korea.

Kim Jong-Un, the dictator of North Korea recently executed his own uncle as well as his entire family to eliminate any and all political opposition to his tyranny. There is no civil liberty in North Korea. North Korea's human rights violations are shocking. Rodman's fraternizing with the enemy is supporting the abandonment of civil liberty. If that's not treason, I don't know what is.

Kim's uncle was stripped naked and eaten by hungry dogs. That is barbaric. Rodman is supporting that as well as Kim forcing woman and children to watch public executions that trample civil liberty. Traitor is too kind a word for Rodman.

Canada supported South Korea in repelling the Communist invaders backed by China. We were right to do so. We were wrong for not supporting Vietnam. That mistake is something we carry with us. Canada was right for not invading Iraq. Bush said Iraq had weapons of mass destruction. They did not. They weren't just wrong, they lied. Kim and the atrocities of North Korea are far worse than Saddam Husein or the Taliban put together. Oh but wait, there's no oil in North Korea so the Corporate Communists don't care. Just like Rwanda. 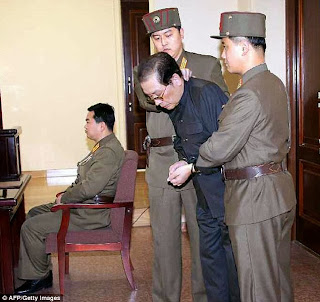 I just noticed Laila Yuile has posted the second installment in a three part series on China's human rights violations called Playing with the Dragon II – The architects behind Canada’s China policy. It's very timely with this new act of treason disguised as a trade agreement called FIPA.