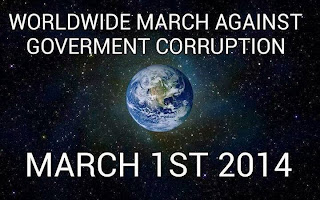 Well. well, well. The Georgia Straight is reporting that rallies from coast to coast will be held Saturday (March 1) as part of the international campaign March Against Corruption. Tomorrow in Vancouver, protesters will gather outside the Vancouver Art Gallery at 1 p.m. for a march downtown. Finally the people are beginning to sing.

Update: Although I totally agree raising public awareness about corporate corruption is crucial in our day, I'll explain why I'm not going to this rally. First is because I don't support the Idle no More movement. Not because I don't support human rights it's because I support equal rights. I don't think any one group is any better than another and has the inherit right to tax and extort the general public just so they don't have to get a job. That is insane. No offense.

Second is because I don't support the Harper no more concept. Although there are many things the Harper government is doing that I totally oppose, just about all of the other political parties support spying and the removal of our civil liberty. That needs to be addressed. We can't end up like the Quebec University students who were conned by the Party Quebecois. The Party Quebecois exploited the University students concerns to get elected then turned around and basically did the exact same thing the other party did once they were elected. Yes Harper is an idiot, but he is the elected idiot. Just like Rob Ford. Who's the bigger fool? The fool or the fool that votes for him?

Thirdly I do not support the ultimate extreme some of the nutbars who are supporting this rally propose. I don't think we should throw the baby out with the bath water. I don't think we should jump out of the frying pan into the fire. The Communists denounce corporate corruption and promise to resolve the matter with force. Wrong. They are the driving force behind the corporate corruption. The right wing extremists are in fact corporate Communists. Wall Street and the big banks funded the Communist revolution in Russia. Communism is not freedom. Communism is not democracy. Communism is not social justice. It is a lie that takes us in the exact opposite direction.

Although I thought Russia did a great job hosting the winter Olympics we cannot forget that right after all that good will they are preparing to invade the Ukraine after they began protesting the removal of their sovereignty. If today is the day we expose corporate corruption, today is the day we expose how corporate monopolies destroy the free market and lead to Communism not freedom. Russian troops have now invaded Crimea in the Ukraine. 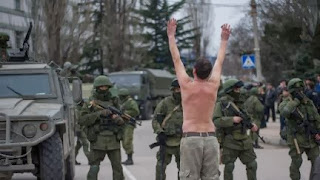 We need to remember that Communism is still a real threat and that the greatest threat to our liberty lies with the enemy from within. Al Martin testified that Jeb Bush instructed him to commit investment fraud as a tool to raise funds for Iran contra. We need to remember that Earl W. Brian embezzled $50 million from Nesbitt Thompson’s clients in Canada on behalf of the CIA which went to fund the October Surprise. The CIA is the biggest criminal organization on the planet then comes the Hells Angels. Word. Just ask the Black Eyed Peas. "Why we have terrorists right here in the USA. The big CIA, the crips, the bloods and the KKK."