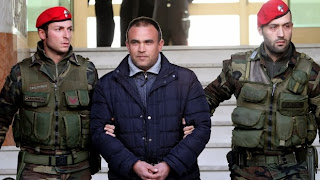 Yahoo news is reporting that the FBI and Italian police say they have arrested two dozen suspects in connection with a transnational heroin and cocaine trafficking conspiracy linking Italy's 'ndrangheta syndicate with the notorious Gambino and Bonanno crime families in the United States which was also tied to Canada. Here's the indictment as well as an overview of it.

CNN is reporting that Gambino, Bonanno family members arrested in joint US-Italy anti-mafia raids. CBC is reporting that police are looking for 8 more suspects tied to the ring in Canada. Calabrians in Hamilton perhaps? Or did they move into Toronto and Montreal after Vito died?