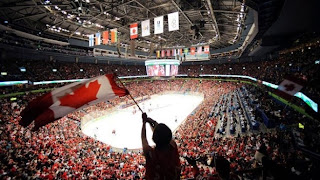 After a previous attempt hits the post Canada scores in the first period of the gold medal game. Canada leads 1 - 0 after the first period. Canada scores again 2-1 at the end of the second period. Canada hits the post in the third period and stays on the offensive. Canada scores again! 3-0 in the third. Canada mens win the gold. 3-0 final score. Da Da Canada. Finland beat the US 5-0 to take the Bronze. Russia takes most medals over all. Norway takes the second most. Well done. 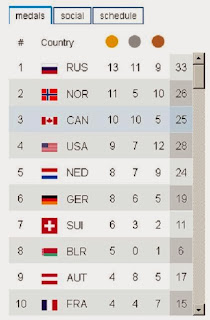 The closing ceremony was awesome. A children choir sang the Russian anthem. It was very nice. Russia pulled it off. They were a wonderful host to a successful Olympic games. It's nice to see a little Russian pride return to the faces of big brother. It's also nice to see the Russian Federation flag replace the hammer and sickle. Peace.