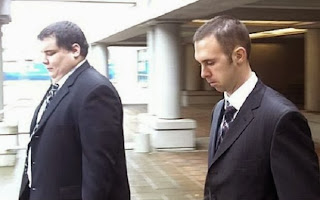 CTV is reporting that Constable Ken Jansen has been demoted and suspended for 14 days by an adjudicator for his part in beating an elderly mentally ill man and jolting him with a Taser four years ago. Criminal charges against Jansen and Surrey RCMP Const. Mitchell Spears who was also involved, were dropped last year when a provincial court judge ruled their charter rights had been infringed by the lengthy delay in bringing the matter to trial.

The Surrey now reported that both officers were originally charged with assault and Spears was also charged with assault with a weapon, namely, a Taser. Before the case was dropped the Surrey Now reported that the court heard that the Surrey RCMP was called to investigate a complaint that Booker had chased his landlord with a knife. Dickie said she expects the court will hear that Spears went into the residence and threatened to use a Taser on Booker.

The elderly man was handcuffed, arrested under the Mental Health Act and was taken to Surrey Memorial Hospital. The prosecutor said she expects the judge will hear that hospital staff found Booker "calm and pleasant," albeit saying strange things.

She also expects the judge will hear that Spears and Jansen were seen on top of Booker, who suffered a head injury that required stitches, and that Jansen was seen "knee-striking" Booker several times. Dickie said an emergency room video will reveal Booker "did nothing" to Spears. Spears is accused of pinning Booker down in a chair and "grasping" his neck. Dickie told the court that the alleged assault was "not provocated" and "the force applied was excessive and dangerous." Spears is the fat guy on the left while Jenson is the skinny guy on the right. Together they look like Laurel and Hardy. Jensen doesn't look very repentant.

It's a hard call to know eaxcty what really happened. The Vancouver Province previously reported that Jansen wasn't on duty that night, but was waiting for RCMP Const. Mitch Spears, who had arrested Robert Booker under the Mental Health Act and was about to hand him over to hospital staff. Jensen was caught lying about what happened and made statements that didn't make sense. The elderly man was in his early seventies.

The court was told that the Surrey RCMP was called to investigate a complaint that the old man had chased his landlord with a knife. Any time a knife is involved that is a concern. Without being there it's hard to determine if it was a steak knife or a big kitchen knife. It's also difficult to ascertain the seriousness of the threat by a 70 year old man with mental health issues. If someone has a knife and a cop says put the knife down or I'll taser you that doesn't sound to unrealistic to me. Actually tasering a 70 year old man is very unwise since at his age that could be considered a lethal attack not reasonable force. So is giving him the boots after he's on the ground.